Plant a tree in memory of Elsie
An environmentally-friendly option 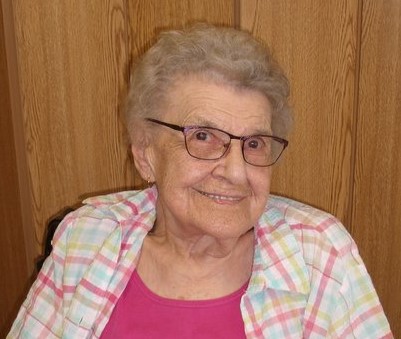 On March 7, 2021,  Elsie  Emmond of Benito, Manitoba, left us to join her family, friends, neighbours at Riverside.

Elsie was born on April 24, 1924 in the R.M. of Livingstone at her grandparents’ home; first child of Nick and Mary Reibin (Kabatoff). Their farm, “on top of Thunderhill” filled Mum’s early years with the excitement of farm life: animals, pets, gardens, crops and gradually the responsibilities that each brought.

Six years later, school days and brother Bill’s June arrival. That fall the school burned and had to be rebuilt. So, Mum’s school days began when she was seven after a year of getting to know her little brother, Rock-a bye Billy.

Getting to Thunder Bird School was a long walk downhill, returning, longer, uphill. English was Mum’s second language, but she was a determined learner and her fluency transferred to her family. She made lifelong friends, created her share of mischief and in 1938 her favourite teacher, M.M. Boyle reported that she was second in class, a very good pupil.

When school days ended, time to look for work. Waitress at Benito Café? Owner Joe Choi said, “Okay, but Elsie too tall.” Mum took the uniform back to the boarding house, hand sewed six inches to the bottom, showed up at work the next day. Happy employer. Happy employee.

It was there that she met Tom Emmond and on May 23, 1944 they were married at the house on top of Thunderhill. Mum moved to SE 6-35-29 to live with Tom and his mother, Isabella Emmond and was welcomed with open arms. She inherited an instant family as Tom had two sisters, two brothers, all married with children! Different farm, same hours, work was plentiful, money was scarce. Life was filled with situations that demanded finding a way, making do, making ends meet or making something out of nothing. But there were plenty of good times. Family gatherings, picnics, dances, card parties, fall suppers, potlucks. Mum enjoyed everything to do with the kitchen and always made sure that there was “something on hand.”

Life on the farm was a balancing act but together they raised two children, managed a grain and cattle farm, welcomed electricity in 1952 and an Elna sewing machine that took up residence at the end of the dining room table. When Peggy and Louis were school age Mum worked as a clerk at Hall’s Food Centre in Benito. They were very busy days, but the extra income helped cover piano lessons, building a new barn for the ponies, steel bins for the grain. Mum enjoyed working at the store, the people she met, and being in town meant she could visit Grandma Emmond and her own parents who had built a house in town. Somehow, she made time to garden, sew for family/friends, milk the cows, help with the harvest.

In 1956 Prince arrived; the little, black, Shetland pony that was the result of what the kids thought was a hunting trip. Prince was the beginning of an incredible chapter in Mum’s life. One thing led to another. Having a pony meant learning to ride well enough to be in the parade at the rodeo. The rider needed a parade outfit. Prince needed saddle, bridle, fancy saddle blanket. Dad made the bridle, Uncle Dick provided the saddle, Mum did the rest and a bit more. She decided if the kids were going to be in the parade, she would check out the Horticulture/Home Crafts and maybe take a few things as there would be room in the truck.

A few things in 1957 were just enough to whet Mum’s appetite. Elsie was a competitive exhibitor for fifty-nine consecutive years, 1957-2016. In that time, she inspired friends and neighbours to exhibit in classes they didn’t know they were interested in. Her mother was an avid gardener, keen on crocheting and baking. Eventually Grandpa’s car was included in the convoy to the fair. Between Elsie and her mum, they could exhibit in almost every class: Sewing, Baking, Needle Arts, Crafts, Flowers, Vegetables, Fruit. Mum was never happier than when she was putting things together to take to the fair. Her family indulged in the baking that didn’t make the cut. Her creativity, artistry, imagination, determination, green thumb, and willingness to give anything a try, all blossomed because the kids needed a pony.

When Peggy left for university and a teaching position in Winnipeg, and Lou completed high school and found employment in Winnipeg, Mum and Dad had the farm to themselves. Uncle Dick and Aunt Rita decided to retire and sell their Hillside Haven Honey business. Dad thought that with a bigger truck he could haul grain/cattle whenever asked. Mum wondered if she could find work closer to home. Opportunity knocked. Doug and Norma McRory bought the honey business and placed a Help Wanted ad in the Star and Times.  Mum had some experience as a seasonal helper whenever Uncle Dick needed extra hands, so she applied. It was a win-win for all parties.

In the off-season Mum could be a full/ part time babysitter/nanny. There were many children who called Tom and Elsie their second mum or dad, Grandpa Tom, Grandma Elsie. There were many cardboard boxes, trips to the moon, blanket tents on the furniture that quickly disappeared when their parent’s vehicle appeared in the driveway. We tried to count all of Elsie and Tom’s “grand/great grandchildren” and gave up.

When it was time to set out the bees in the spring Mum would be off to the bee yards with the new help that needed training on the job. Many times, the bee truck passed the grain truck on the way to the elevator and there were many stories of things that happened on those bee yard trips. Elsie eventually moved from outdoor work to the extracting room, a hot, sticky workspace. Everyone had to pull together to keep the extractor fed. Doug said that Elsie was the fastest uncapper operator that he had ever worked with and the rest of the crew had to run to keep up.

There was never any sitting still for Mum and Dad. When they moved from the farm into town Lou wood-burned a little sign to hang near the front door; a sewing machine with Tom and Elsie written on the bottom. It was not long before there was a steady stream of alterations, hems, bridesmaids’ dresses, zippers, Halloween costumes, quilt repairs, suits, jackets, skating outfits, seat covers, boat covers, until Mum’s third Elna packed it in. She thought maybe that meant she was finished with sewing, but the doorbell kept ringing, customers kept calling. Her first computerized sewing machine, a Janome 9000 made its entrance. There were purple and blue clouds of frustration wafting up from the basement sewing room. The learning curve was steep, the 1-800 number received a workout, but Mum finished the wedding dress before the December wedding date. It was beautiful, just like the picture in the magazine, and the bride was one of the many children that Mum babysat.

Those who met and remember Elsie say she was a special and wonderful lady, looked after our kids so we could make the trip of a lifetime to Holland, tatted beautiful lacy butterflies, was an asset to a small community, was inspiring, independent, a doer, and a champion, was vibrant and fun to be around, always had a smile on her face and had us laughing from our boots, was hospitality plus…

Her smile was full of joy, humour, with a dash of mischief and her light and energy will shine on in the many lives that she touched.

Elsie is survived by her daughter Peggy (Dave) of Winnipeg; many nieces and nephews; a sister in law; and an aunt. She was predeceased by her husband Tom; her son Louis; parents; and sisters and brothers in law.

In keeping with Covid 19 restrictions a service will be held at a later date. Should friends so desire, donations in Elsie’s memory may be made to the Swan Valley Health Facilities Foundation Inc., Box 1450, Swan River, Manitoba   R0L 1Z0

Plant a tree in memory of Elsie by clicking here.
To send flowers to Elsie's family, please visit our floral store.

Plant a tree in memory of Elsie
An environmentally-friendly option

Plant a tree in memory of Elsie

1 tree planted in memory of Elsie

A Memorial Tree was planted for Elsie Emmond

Plant a tree in memory of Elsie